AN FRANCISCO — NSFW, the independent film arm of NakedSword.com, will debut Nova Dubai, the acclaimed film by Brazilian auteur Gustavo Vinagre, on the site this weekend. In Vinagre’s sexually explicit hybrid-documentary, the director, his boyfriend and their friends rebel against local gentrification that’s brought towering condominiums for the ultra-wealthy to their neighborhood. 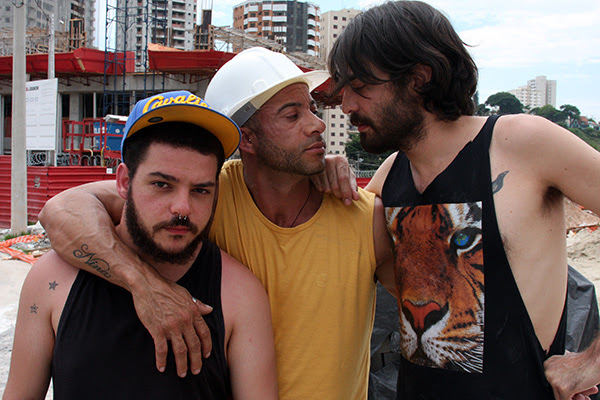 Adam Baran, curator for the NSFW program, first saw the Nova Dubai at a screening at New York’s Lincoln Center as part of their prestigious “Art of the Real” festival. It played nearly fifty festivals, including Rotterdam, Torino, and MIX Brazil, but had trouble finding distribution, due to shots of explicit sex, before Baran brought it to NakedSword.

“It’s a really engaging and compelling film that weaves together complex issues of globalization, income inequality, immigration, masculinity, and sexuality in a frank queer context. And it does it in a really playful and sexy way, so I was really excited to bring it to NSFW, which is so focused on bridging the cultural gap around sex. Fans of films like Stranger By the Lake, Shortbus and I Want Your Love now have a new favorite film.”

Nova Dubai (“New Dubai”) intersperses real stories of gay men — and non-identifying men who have sex with men — in the shadow of a rapidly changing São Paulo. Vinagre draws explicit comparisons between the two:

“This is a political film that isn’t shy about sex, and it would be a crime to let the presence of one silence the other. This is no time for our community to self-censor, or to deny dissenting voices. We need to get more films like this out there, as both an industry and a community.”

The full list of NSFW films can be found at NSFilmworks.com, as well as on NakedSword. Press links to Nova Dubai and passes to NSFW are available upon request.

ABOUT NAKEDSWORD and NSFW