Gay porn’s reigning hate blogger Zachary Paul Sire, who for some reason thinks Pass The Tea mistook him for the editor of The Sword (everyone knows Zach was fired from the Sword in 2013, so we don’t know what he’s talking about!) is throwing a fit because Nica Noelle gave a statement to PassTheTea in response to a story published by The Sword.

When a fan pointed out that the story doesn’t say Zach works at The Sword, a confused and defensive Sire snapped that he “can read” but that the story “implies” that he had something to do with The Sword’s “idiotic bullshit article.” 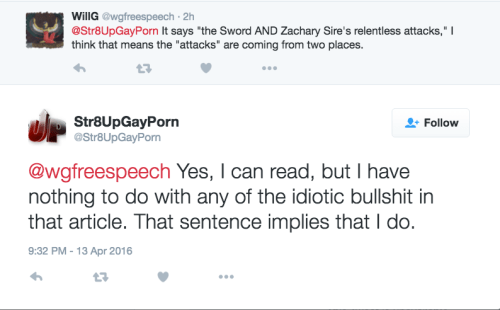 Then Sire inexplicably calls Noelle a “nutjob” in his next tweet, to director Chi Chi La Rue. A puzzled La Rue responds that she is going to “delete the tweet” that triggered the emotionally unstable blogger.

Now in the full throes of a twitter rant, Sire fires off a series of paranoid tweets where he expresses rage that Icon Male’s owners, directors and performers are all “straight” and/or “gay for pay.” 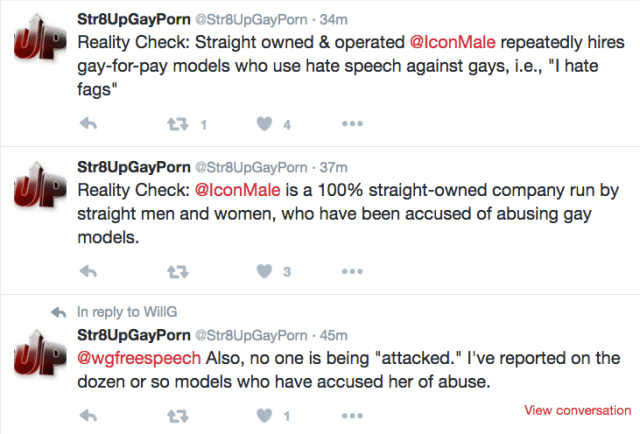 “The monster he’s looking for,” Noelle added, “resides in his mirror.”

As for Sire’s insistence that Noelle “abuses models,” Noelle claims that Sire “knows there is no model abuse, and that he alone is the continued source of assertions to the contrary.”

“He’s so fixated on me, it’s really bizarre,” Noelle added. “It’s scary to know this lunatic is obsessed with our studio and gets so emotionally triggered by me.”

Noelle adds that although Sire has blocked her on twitter, that he still obsessively follows her tweets and reads any press releases or interviews that feature her.

Despite Sire’s disturbing behavior toward her, Noelle said she is more concerned for the gay performers Sire targets.

“I hope Zach gets the help he needs and leaves me alone,” Noelle said. “But most of all I hope he stops degrading the vulnerable young men whose work he pleasures himself to.”