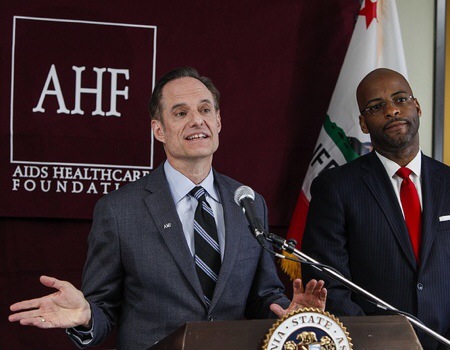 LOS ANGELES — The Free Speech Coalition has filed a formal complaint with the Internal Revenue Service (IRS) over the tax-exempt status of the AIDS Healthcare Foundation, following a report in LA Weekly on Saturday which detailed the non-profits’ abuse of its tax-exempt 501(c)(3) status.

Under the controversial leadership of Michael Weinstein, the AIDS Healthcare Foundation has spent over $23 million on measures ranging from anti-development initiatives to the controversial adult film initiative, Proposition 60, according to LA Weekly.

“Michael Weinstein is using millions of dollars intended for people living with and affected by HIV on dubious political campaigns that benefit his bottom line,” says Eric Paul Leue, Executive Director of the Free Speech Coalition. “This is not only a gross violation of IRS limits governing non-profit political spending, it’s an absolute abandonment of his organization’s moral imperative. Weinstein is robbing underserved communities that need treatment and education dollars to fuel anti-science moral crusades. We’re asking the IRS to immediately begin an investigation.”

AHF is currently being sued in Florida over an alleged $20 million dollars in Medicare fraud, and has previously been sued for overbilling Los Angeles County by $5.2 million.

Several of the new violations could cost AHF its tax-exempt status.

Among the alleged violations included in the complaints submitted to the IRS:

“Michael Weinstein’s out of control political spending is putting his organization’s non-profit status at risk,” says Leue. “We also have reason to believe they are misusing federal 340B funding intended for uncompensated care to help finance political campaigns and for-profit business development.”

Proposition 60, an initiative on the November ballot in California, would allow Weinstein to file lawsuits against adult performers for not using condoms, and collect 25% of any fine assessed on each successful prosecution.

Documentation and copies of the complaint available upon request.